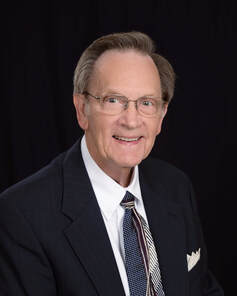 William Collins Glenn
1933–2020
​
Dr. Collins Glenn professed faith in Jesus Christ as Lord and Savior while he was a young boy. In 1955, at the age of 21, he answered the call of God and surrendered his life to serve as a minister of the Gospel. Soon after, Pastor Glenn left his sales profession and prepared to preach, enrolling at Bob Jones University where he received his B.A. (’60). An honorary Doctor of Divinity from San Francisco Baptist Theological Seminary was awarded him in 1976.
In 1964, Pastor Glenn moved his family to Indianapolis where he accepted the pastorate of Joy Baptist Church. Three years later, he candidated here at GBC and, in February 1967, was called as pastor. On February 5, 2012, Dr. Glenn completed 45 years of ministry at Grace Baptist Church, and became our Pastor Emeritus.
Pastor Glenn authored the Dispensational Home Bible Study Evangelistic Program, used widely by churches throughout the U.S. and around the world.
At the time of his Homegoing he served as pastor of Temple Baptist Church, Dunkirk, Ind., and as a board member of Baptist World Mission and the Fundamental Baptist Fellowship International. He long had been associated with the Indiana Fundamental Baptist Fellowship, Advance America, and the Indiana Association of Christian Schools.
He and his wife Duriene had two children, seven grandchildren, and two great-grandchildren.